While the newest issue of the standard series will not release until next month, there is an addition of a new international issue and even a new series!  Great Scott!

Editorial Kamite in Mexico has now added issue #6 to their releases. It was released on 9/11/17. You can check out the images above, as well as on the international section of the guide here. You can also find the official website for Editorial Kamite here.

And now for the exciting news!……

Tales From The Time Train! Another new series being released by IDW Publishing later this year…… so in the Future I guess? Lol……

The series has an estimated release date of 12/20/17, so just in time for Christmas! Here is an official story description, right from IDW……

“It’s 1893 and at last, Doc Brown fulfills his promise to Clara as he’s completed the project he’s been working on: the Time Train! But where in time and space will the Brown family go on their inaugural trip? And what could possibly go wrong if and when they get there? Lots! Join Gale, Barber, and Megan Levens as they kick off the newest Back to the Future series!”

I am very excited to read these, and see how they fit in with the regular running series as well! And collector’s have no fear. IDW has us covered (pun intended) with alternate covers for this release. There are 4 in all: 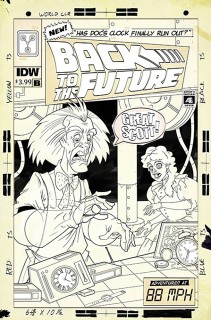 These covers have been added to a new cover gallery for this new series, and can be found here. The new series has also been added to the Story Lines & Release Dates section of the guide here.

Please keep in mind though, that the new series could have a different release date or could change later. When or if that happens, I will be sure to update the guide accordingly. Also, there is no artist info on these covers as of yet, and that info will be added once I have it.

That’s all for this update BTTF fans! Till’ next time remember, your future hasn’t been written yet, so make it a good one!