Backyard Baseball is a series of baseball video games for children which was developed by Humongous Entertainment and published by Atari. It was first released in October 1997 for Macintosh and Microsoft Windows. Later games were featured on Game Boy Advance, PlayStation 2, GameCube, Wii, and iOS. There have been eleven different versions of the game since 1997. It was released for GameCube In the USA on April 2nd, 2003.

The original game consisted of 30 neighborhood kids which the gamer could choose to play. Over the years, the idea of “Pro players as kids” became popular, and the original statistics and looks of the players changed. This game has various playable modes, they include: Single Game, Batting Practice, Spectator, and Season Game. 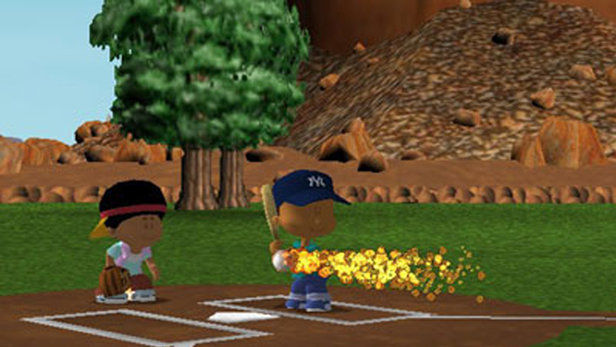 In 2013 “The Evergreen Group” acquired the IP from Atari.

“Wait for me Sonic!” 😃
“Eternia Will Be Mine!” 😈
“Wanna hear the most annoying sound in the world?” 😁
Yippie Ki Yay Motherfu...... 😎
Pivot! 😃
I appreciate everyone who follows me here on Instagram! Just a reminder I also stream on Twitch twice a week, including a live AEW watch a long every Wednesday! Link is in my bio.
Grabbed the GameStop exclusive 'Funko Pop Masters Of The Universe Mystery Box' earlier this week. Must say I LOVE the Flocked He-Man Pop! The extra goodies were very cool as well. That Scareglow pen! 😃
Found 3 more Pops today. I may have a new addiction...... lol
For The Honor Of Greyskull!