Donkey Kong Jungle Beat was a platforming video game developed and published by Nintendo for the GameCube. It was released in North America on March 14th, 2005.

Gameplay involves combat, jumping, and counterattacking. While the traditional GameCube controllers are compatible, Donkey Kong Jungle Beat uses a pair of bongo drums to control Donkey Kong’s actions. Hitting the left drum causes DK to move left, while hitting the right drum causes him to move right. Hitting both drums at the same time causes DK to jump. Clapping one’s hands or hitting the sides of the drums also causes DK to clap, which has various consequences depending on the situation. 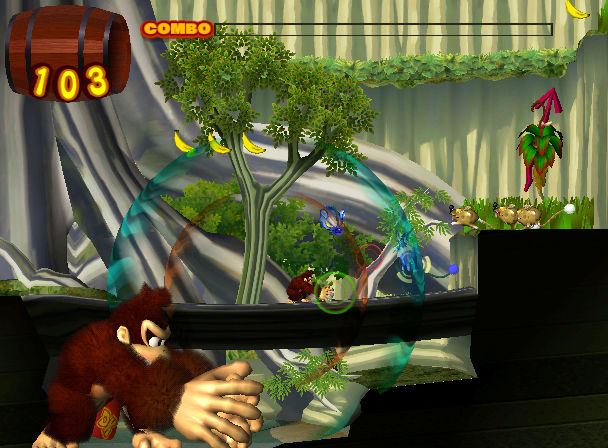 Most reviewers considered it unique and fun to play but rather short given the retail price. It was praised for its wide appeal; possessing both a simplicity targeted at new gamers, and a complex, skill-oriented combo system to attract more hardcore gamers.